music:
Serotonin- Nine Horses
Get on With Your Life- Stina Nordenstam
Omaha-Damien Jurado

I will be doing a podcast for the Central City Co-op. Look for more news in the next couple of weeks.

Listen for how to win this weeks contest, the prize? A Wow and Flutter DVD autographed by writer/director, Gary Lundgren

Listen to the Worst Music You’ve Ever Heard Podcast. NOW!

Falling Hard for the Girl by Lanky.

Interview/discussion with my pal JW Richard about race, the death penalty, and podcasting.

Shout out to Mike Hipp of Podcast Soup and Soy Candles by Phebes.

I seem to have taken leave of my senses at the end of this show. Please forgive.

KEEP the e-mails and comments coming! I love to hear from you guys! This has got to be my favorite interview yet, and my first in “studio” interview. My favorite Houston band: The Black Math Experiment. Talking about their new release Fake Words and Signs from Space, their upcoming gig with Nina Hagen, and what it’s like to be an “über-pretentious, derivative, and utterly shitty pose-rock band.”

Thank you for 2005:
Russell
11 years of sobriety
MikeyPod, and my new podcasting related friends
Madge Weinstein
Cabaret with Erin
Adventures with Brandon
Unity Theater
Tiffany and Seph
Reconnected with Mom
Melinda and her patience
Beginning a new business
Kitty and her consistancy
I woke up politically
Kali, and her new talent-purring
Jim, Carolyn and Levi
Jesse
Curtis
a glimmer of a return to Buddhism
Jeanie

In 2006 help me to:
Find satisfaction with where I live, and the clarity discover where you want me to be
Harvest a sense of adventure
Stop being so NICE (Nothing Inside Cares Enough)
Grow Spiritually
Be reliable
Create more of the type of art that I feel passionate about
Spend more time creating, composing, performing these things that bring me joy
To only make promises I want to keep.
Grow Socially
Live a Heathier lifestyle
Spend/save money with responsibility
Respect myself
Do more than what is expected of me…joyfully
Cultivate more passion about what I believe in
Be punctual
Develop a belief in abundance

Todd Spivak’s Story on Podcasting in the Houston Press

An interview with my friend Chris, a Gay Catholic, who explains how he is able to reconcile his spirituality with the Church’s stance on Homosexuality. My apologies for coughing all the way through the interview.

We ride our bikes
around the circle in the cemetery,
weaving.
I wave up to You on the Cross.
Am I to come upon You suddenly like this forever?
Happy, relieved that You are here
and I can see You, I can feel You?

You are like the ticket-half
I find inside the pocket of
my old leaf-raking coat.
There all the time, all the while,
forgotten.
I so often seem to leave You
in churches
and other islands.
And on my beads
where I can see You, I can feel You.

Our self-importance grows so dazzling we don’t see
You.
But Gentle Jesus, aren’t You always,
aren’t You every hour here?

The short film Wow and Flutter is on the DVD that came with this month’s Paste Magazine. It tells the story of an adolescent boy and his love affair with music and the process of making a mix tape for his first crush. Just great, and this kid reminds me a little too much of me.

How do I love you, Paste Magazine? Too much.

In other news, I will be going into the hospital Thursday morning to have two kidney stones blasted by my (self described) friendly neighborhood Urologist and his trusty lithotriptor. Light a candle for me or something on that day.

Tomorrow night, though, I will be interviewing my friend Chris, a gay Catholic, to get his take on the lastest from the Pope. Upcoming shows will feature a local Pinoy Rock Musician, and my current favorite local band, The Black Math Experiment. Hopefully this makes up for the lull in outside forces to the show. Also, Bicyclemark should be back in the new year, and as always, you can expect more from my pal Laurence Simon as well. 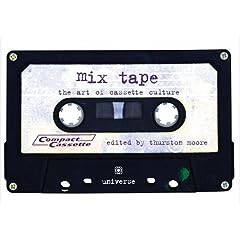 After reading Thurston Moore’s Mix Tape: The Art of Cassette Culture (thanks Curtis!), my longing for the days of making mix tapes has grown. Back before CD burning was so commonplace, and before I digitized my CD collection, I would sit on the floor of my apartment surrounded by CDs, mixing, and listening, and backing up and replacing. I quickly learned the idiosyncrasies of each tape deck I owned, and figured out how to go from song to song without any annoying glitches or clicking, and agonized over finding a nice short song for the end of each side that fit both the mood, and the time remaining. I love that music has become so easy to access and share, but in many ways I miss the adventure and the act of creation that came with the old days. All that said, I just finished a mix CD that I am quite happy with. If anyone is interested, I will make it downloadable here.

Intro by Gary from Chub Creek

sidenote: Mary Margaret O’Hara is the singer on this recording I forgot to mention. I just discovered that she is Catherine O’Hara’s sister. I had no idea. This excites me.

Now, back to the show notes.

A little discussion about the death of Stanley “Tookie” Williams

Brokeback Mountain inspired malaise. Eliott! Are you still out there?

Santa Claus is a Black Man- Akim and The Teddy Vann Production Company from A John Waters Christmas. Thanks to JK Fabiani for bringing that song to my attention!

Plus, I yammer on about how I want your feedback, and for you to sign on to my Frapper! Map.